Register For Camp
Balance Due Form

IN ANY WALK OF LIFE

Cathy Rush established herself as a leader in women’s sports while coaching basketball at Immaculata College in Pennsylvania. Under her guidance, Immaculata College won three consecutive National AIAW Championships (1972, 1973 & 1974), five Eastern AIAW Championships, and two National AIAW Championship Runner-Ups. Often referred to as the “John Wooden of Women’s Basketball,” Cathy Rush’s tenure as a women’s basketball head coach might have been short, but it had a huge and lasting impact. The only Cathy Rush appearance as a collegiate head coach lasted six short years, from 1972 until 1977. Still, during that brief stretch, Rush’s team also made the Final Four every year, and her teams played in the national championship game in every year but one.

Coach Cathy Rush was the head women’s basketball coach at Immaculata from 1970-1977. She led Immaculata to three consecutive AIAW national titles from 1972-1974. Overall, she guided the Mighty Macs to 6 consecutive final four appearances in her seven seasons with the college, attaining a 149-15 record. Rush was inducted into the Naismith Memorial Basketball Hall of Fame on April 7, 2008. She was inducted into the women’s Basketball Hall of Fame in 2000 and the Philadelphia Sports Hall of Fame in 2005.

Some of Cathy's Accomplishments:

Presently, Cathy is actively involved in the following: 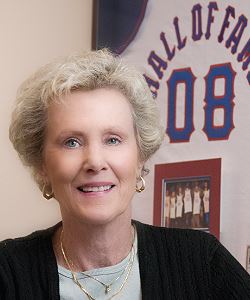